Why India’s senior citizens are opting for retirement homes

For all intents and purposes, Serene Adinath, a building complex near Vandalur, could pass off as a college hostel.

Walking across the first floor library and ‘multi-purpose room’, to enter the canteen, I expect a grubby teenager to walk out in shorts, complaining about the food. Instead we are met with two friends in their 50s, sharing a peaceful conversation over a cup of steaming hot kaapi.

Serene Adinath, built in 2015, acquired and managed by Seattle-based Columbia Pacific Communities, is one of many senior living residencies — gated apartments that can be bought exclusively by senior citizens. It’s a concept that India is increasingly warming up to, judging by the growing number of such retirement homes across the country.

“Let me make one thing clear first. This is not an old age home,” states resident Lakshmi Swaminathan. At 57, she is relatively younger than the rest, and the in-house ‘gadget guru’. Her husband, TS Swaminathan, talks over her as a couple who has been married for years is wont to, “She’s right, we chose to live here. Every day, we are busy here: one day with cultural activities, the next day carrom, yoga, pujas, and so on.”

“Fifteen years ago, India was not culturally ready for children to have their senior parents live separately. But now the circumstances are such that the children move to other countries or cities, for their career, and their parents stay alone,” says Mohit Nirula, CEO at Columbia Pacific Communities, explaining the rise in retirement homes.

Columbia Pacific Communities is managing nine such communities — many of them in Coimbatore, the new hub for such homes — of varying levels of grandeur. On the other hand, some are exclusively high-end, such as Antara Senior living in Dehradun, and Bless Retirement Living on the outskirts of Aluva, near Kochi.

“This kind of community living ensures that there is neither loneliness nor alienation, and therefore better mental health. Seniors are secure and their self esteem is intact as they don’t have to depend on their children. There is a professional system in place to take care of them,” says Babu Joseph, of Bless Retirement Living.

The premium retirement community, which began functioning in 2016, has 64 apartments, on three acres, all of which are booked and is now moving into the next phase of construction with additional 100-odd apartments. “Initially we were sceptical about the response. But the stigma around senior living communities is gone, perhaps,” he adds.

Columbia Pacific Communities, too, saw a similar curve of growth, with its houses in five cities being sold out completely. “Some book the apartment for future use, and until then rent it out to other seniors,” says Mohit.

After her husband passed away 10 years ago, 78-year-old Lalitha Ramachandra lived in New Jersey with her son for five years. “There wasn’t much I could do for fun there. Go out on a stroll, walk the dog…” She came back to India, to live at Serene Adinath. “I have always been restless, I need something to keep me occupied every day,” she says, just back from yoga class.

For couples like TS Swaminathan and his wife, it is comforting to know that there will always be staff for housekeeping and to prepare meals. “You don’t have to worry whether the help will turn up the next day or not,” he says. Seventy-six-year old Shankar Raman, who retired six years ago adds with a chuckle, “Now my wife can retire too. She doesn’t need to worry about running the kitchen. And that means fewer domestic squabbles!”

While most rely on the assurance of a medical staff on board, some senior doctors in Kochi have flipped the idea on its head. “There are so many doctors who, post-retirement, don’t have much to do. They have so much experience which can be used for the community,” says Dr Jeeji Palocaren, Head of Biochemistry, MOSC Medical College. She is on the core team behind Ayana Doctors Retirement Retreat — a facility exclusively for retired doctors scheduled to be ready in two years.

An out-patient clinic within the property will ensure that the doctors are busy and doing their bit for the community. “We decided to keep it exclusive as most of us, from the profession in Kochi, have known each other, studied together, lived in hostels together — there will be that sense of living with friends and the comfort that comes with it,” she says.

Architect Leena Kumar of Kumar Consultants who has designed may senior living homes says, “Accidents are common with the elderly and many times the flooring proves to be the culprit. The spaces should be free of thresholds and have non-slippery flooring. Wood flooring, linoleum are good options.” Materials should be anti-bacterial, dust free and easy to clean and maintain, she adds.

Since accidents invariably happen in the bathrooms, she advocates, besides non-skid tiling, the presence of grab bars in the toilet region, bath area as well as near the wash basin. “I keep bathrooms fairly large to permit the use of a walker or an assistant to aid in use.”

“Senior citizens need to be independent and we do that by ensuring their safety, dignity and health, cognitive and physical,” says BRB Puthran, CEO and one of the founders of Alive, an ageing Solutions Company. Their project on more than two acres at Puliyarakonam in Thiruvananthapuram has both villas and apartments for senior citizens.

“The Rainbow Project is looking at a holistic lifestyle. So, in addition to doctors on the premises, yoga and group activities, we will organise classes in music, dance or art or whatever they would like to learn. One of the ideas that has many takers is volunteering. We have already adopted two villages in the neighbourhood and we hope to involve the residents of the Rainbow Project in the activities too. The idea is to help them live life to the full in comfortable and safe surroundings. We will be handing over our homes by end of 2019,” adds Puthran.

A cure for loneliness

When Usha Kala, 72, decided to move to Ashiana Senior Living, in Bhiwadi, Rajasthan, it was mostly out of a sense of insecurity — there was the feeling that at some point in the future, if either she or her husband passed on, there would be a void. Though her husband did pass away before they could occupy the three-bedroom house, Usha moved in last year.

She says she loves the camaraderie amongst the 100-odd families that have occupied the facility. In fact, they have a group of singles, who often get together over potluck parties. “I have never lived in a hostel, but I imagine this is what it must be like,” she says.

Back in Chennai’s Serene Adinath, Lalitha has managed to win a similar fight against loneliness. With the evening light glowering behind her, she will soon join one of the many groups of men and women, chatting about what should be on the canteen menu, , the elections, and for the nth time, sharing memories of their youth. “It’s like sucking a mango seed. There’s sweetness in it, every time.” 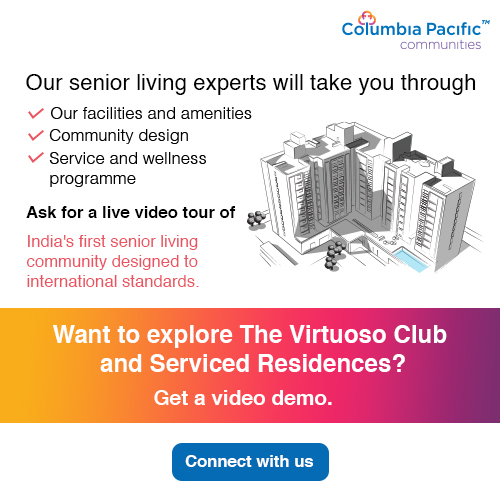