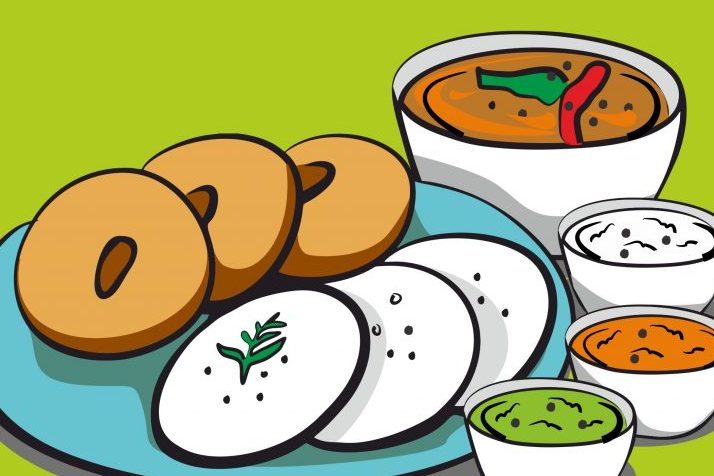 The fly got tired of hearing the loud noises on the road. As it got hungry, it started looking for a place to eat. As it flew, it sensed a wonderful aroma from a nearby building. It followed the smell and entered the building through a window.

Once inside, the fly found itself in a hall filled with the loud chatter of elderly persons, seated at tables and having food. The fly decided to look around for options before deciding on the menu.

A gentleman at one of the tables said, “The idlis are soft today and taste so good with the chutney.”

Another person said, “Yes, but the thickness, size and diameter of the idlis are small.”

At another table, a lady said, “The masala dosa is very good today.” The person seated in front of the lady said, “Yes, but the quantity of vegetables inside is very less.”

At yet another table, two elderly people were analysing and criticising the Upma served on that day.

One gentleman was talking loudly with food in his mouth, even as the food particles flew from his mouth – left, right and centre.

One person appreciated the crisp Medhu vadas while her friend beside her commented “Yes, but the holes at the center are small.”

Another lady commented “The puris are soft and tasty,” to which, her husband replied, “Yes, but so much oil in the puris. Too much oil is not good for health”

The fly stopped by a table where two persons were having coffee. One said, “Ha! The coffee tastes just the way I like – hot, thick and dark – without any sugar.” The other person responded, “I don’t know how you drink such bitter coffee. I like my coffee light, with more milk and 3 spoons of sugar in it.”

The fly’s curiosity got the better of it and it tasted a drop of coffee from the cups carried by the bearer.

The fly heard many voices, and found some persons were smacking their lips with loud noise, some licking their fingers. Then it remembered the advice given by its parents –

Don’t be obsessed with food

Eat to live and not live to eat

Eat with your mouth closed

Eat only half your stomach and quit for you have to be alert and swift when a human tries to swat you.

So the fly ate till its stomach was half full and flew to the next room which was empty and rest on a wall, away from the loud noise, until lunch time.